RAD Torque and the Aerospace Industry

At RAD Torque Systems we’ve worked with major players in the aerospace industry – including aircraft manufacturers and airlines – for more than two decades.

We understand that engineers and mechanics who build and repair commercial airplanes need the right tools to get jobs done safely and efficiently.

That’s why we work directly with engineers to design and manufacture high-torque wrenches, offsets, multipliers and reaction arms to solve problems and complete tasks that are unique to the aerospace industry.

The aerospace industry relies on heavy-duty torque tools to hold an airplane’s hundreds of thousands of components together. For this reason, data logging is of the utmost importance. Each bolt – from nose to tail – must be fastened using the right amount of torque.

RAD’s multipliers provide manufacturers with accurate data so they can rest assured that components are correctly installed to withstand extreme forces placed on them in flight.

All parts reachable with RAD

A 737 airplane has approximately 600,000 parts and not all of them are easy to reach. Many bolts are hidden under other components, making them impossible to access from above.

RAD creates custom offsets to help mechanics reach low clearance bolts. In fact, all offsets that we do for commercial airline manufacturers are custom-made.

Aircraft companies come to us with applications, we create model offsets using 3D printers, engineers make sure they work and then we build them.

RAD understands that the aerospace industry has unique needs. We know that when working on commercial airplanes, mechanics need tools to fit tasks and not the other way around.

We understand that safety is top-of-mind for aircraft manufacturers and commercial airlines. This includes the safety of passengers who fly on finished planes, as well as the safety of engineers and mechanics who build and maintain the aircraft.

Our multipliers can change settings for specific foot-pounds to quickly and accurately torque fasteners. This means mechanics don’t have to apply manual force when installing nuts and bolts and can avoid shoulder injuries.

One aircraft manufacturer told us that it used to take three people almost a full shift to torque an airplane’s nose gear fasteners. But with RAD’s torque multiplier, the task now takes one person less than an hour to complete and with no injuries.

RAD also provides aircraft manufacturers with custom reaction arms so that mechanics can do high foot-pounds without getting any kickback into their hands.

We understand that in the aerospace industry safety is in numbers – the right foot-pounds and the ability of mechanics to protect themselves against any rotational load.

Building and maintaining airplanes is a big business with an even bigger price tag. That’s why RAD makes tools in multiple ratios.

Our multipliers allow aerospace mechanics to achieve the correct amount of torque with several different tools.

All they have to do is switch the multiplier to the next tool and calibrate it. With RAD, there’s no need to have three multipliers for three different tools.

We offer a whole suite of tools to the aerospace industry to help manufacturers and airlines build and maintain aircraft.

has designed its operations for maximum flexibility and responsiveness ensuring our customers receive outstanding service. With our ongoing investment into Research and Development, this ensures a continuous flow of bolting innovations.

With 10 engineers on staff, we have the ability to provide custom solutions for applications in many different industries including aerospace, oil and gas, petrochemical, mining, wind power and manufacturing. 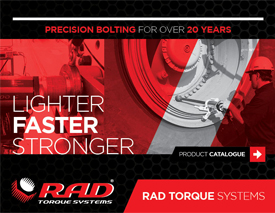 Owner Challenges Other Businesses to Donate Today   ABBOTSFORD, (March 15, 2022) – As the situation in the Ukraine worsens each day...