ABBOTSFORD, (March 15, 2022) – As the situation in the Ukraine worsens each day and the recent appeal by the Canadian Red Cross for donations, RAD Torque Systems is stepping up to donate $25,000 to help relief efforts. The company’s owner encourages other Canadian businesses to donate.

“The situation in Ukraine is heartbreaking. I believe we should be trying to do everything we can to support the people affected,” said Dan Provost, Owner of RAD Torque Systems. “It’s clear there is a need to help support the humanitarian efforts in and around Ukraine and I encourage all Canadians – especially my fellow business owners – to donate to the Red Cross.”

The donation of $25,000 helps support preparedness, immediate and ongoing relief efforts, long-term recovery and resiliency. As well as aiding other critical humanitarian activities as needs arise, both in Ukraine and surrounding countries, including supporting populations displaced.

On February 25th, the Government of Canada announced that it will match every donation made by individual Canadians to the Canadian Red Cross between February 24, 2022, and March 18, 2022, up to a maximum of $10 million.

Owner Invites Other Local Businesses to Join Them and Donate

ABBOTSFORD, BC (December 9, 2021) – While the waters may have started to recede in Abbotsford following the recent devastating floods, clean-up and recovery is the next mammoth task ahead, and a local business is donating $50,000 to the Canadian Red Cross to help in those efforts.

RAD Torque Systems, a global industrial torque wrench manufacturer that calls Abbotsford home, made the large donation this week/today. Because both the B.C. and federal governments are matching donations, RAD Torque Systems’ $50,000 donation equates to a total of $150,000 in aid to help those who have lost homes, businesses and livelihoods.

“We employ more than 100 locals in Abbotsford, and we love this community and have seen first-hand the devastation and heartbreak this extreme weather has caused,” says Dan Provost, owner of RAD Torque Systems. “With both levels of government matching funds, five dollars quickly turns into $15 and that’s a great incentive for everyone to donate. In fact, we want to invite – even to challenge – other businesses to join us in donating to the Canadian Red Cross, because there is a lot to be done here to help people get back on their feet.”

According to the Canadian Red Cross, households that were vacated as part of an evacuation order are eligible to receive $2,000, but for many, that is not nearly enough to replace what was lost. In less than one week, nearly $6 million has been distributed to evacuees.

One of those evacuees was a RAD Torque Systems employee who had to leave his home and belongings behind when the water levels started rising.

Provost adds, “I’ve seen our business community rally for fire victims this summer, and I’m calling on them to do the same for those affected by the floods. If we CAN help, we must.”

The B.C. and federal government will be matching donations made by individuals and corporations until December 26th.

To donate to the Canadian Red Cross visit: https://donate.redcross.ca/page/94172/donate/1?locale=en-CA

ABBOTSFORD, BC (November 24, 2021) – The popular Edmonton racetrack and complex (formerly known as Castrol Raceway) has a new name: RAD Torque Raceway. The name change is part of a new and exciting five-year sponsorship agreement between the Reeves family, owners of the popular raceway, and RAD Torque Systems, a torque wrench manufacturer from Abbotsford, BC.

The agreement is a result of one man’s passion for racing. Dan Provost is RAD Torque System’s founder and president, and he and his family have been heavily involved in motorsports for many decades — often sponsoring drag race cars, teams, and events across North America.

“Canadian drag racers have not been allowed in the US to compete for the last two years due to COVID-19, so our participation in the Edmonton race facility is welcome news for all of us,” says Provost. “This partnership is a natural fit for us. Many RAD Torque customers are from Alberta as a result of the oil and gas industry, and many drag racers in the province know us and use our tools.”

Dan Provost has been racing for more than 12 years. But it was his son, Darien — a drag racer himself — who introduced his father to the Reeves family.

“I was first introduced to Chevy Reeves, and I was impressed with him as a person and a racer. I agreed to sponsor his beautiful dragster with the RAD Torque logo,” says Provost. “I later found out that there was an opportunity to take over the sponsorship of the ENTIRE race facility. Needless to say, I was very enthusiastic to become such a large part of the amazing facility in Edmonton.”

The new partnership and facility name also comes with some exciting facility improvements: the quarter mile dragstrip will be resurfaced, new sound systems will be placed throughout, LED lighting upgraded, and app-based competitor tech and registration enhanced.

“We are lucky to have RAD Torque Systems, a Canadian company with a strong racing background, support our raceway,” says Chevy Reeves. “Since news came out about RAD joining our racing family, we’ve received overwhelming positive feedback from our fans.”

The raceway will host a large launch party in mid-November to celebrate the new partnership. 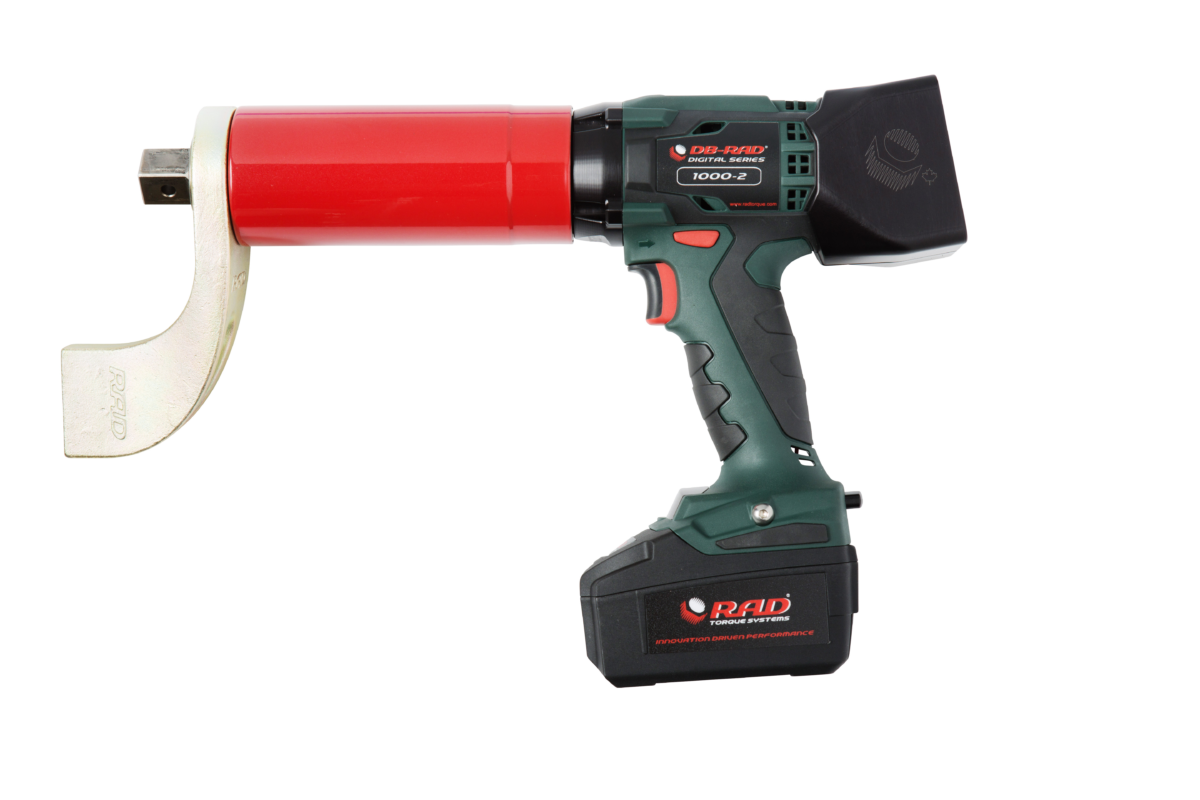 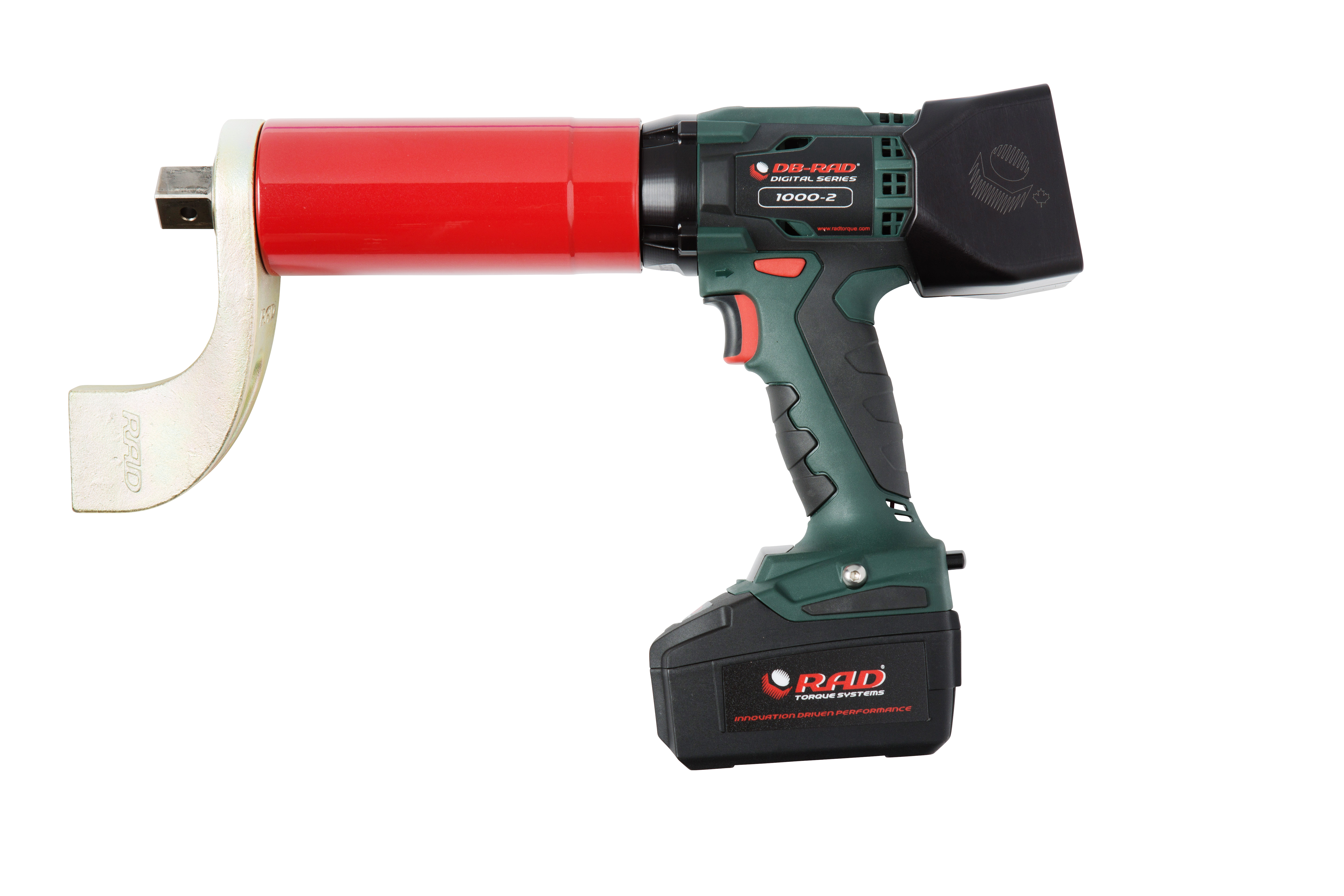 When the team at Baffinland started planning an expanded rail link over the Arctic tundra, nearly 100 kilometers away, they knew they’d need tough tools to get the job done — so they turned to RAD Torque Systems.

Linking Baffinland’s River Mary mine to their new Sealift facility meant they needed to acquire more torque wrenches that could withstand the extreme cold temperatures. How cold? Well, the new facility sits about 1500 kilometers inside the Arctic Circle reaching an average winter temperature of -35C. It’s so cold that the extreme weather only allows for 90-days of ice-free shipping every year.

Typically, pneumatic tools are the primary choice for work done in these sub-zero temperatures. However, in these extreme situations, air tools freeze up and workers cannot run alcohol through the lines to keep them from doing so.

Having used RAD Torque battery tools in the past, Baffinland knew that the B-RAD and DB-RAD would be perfect for the extreme conditions. In particular, the Digital B-RAD 3000–2 has become the service tool of choice for both mine operations as well as fleet maintenance.

RAD battery tools exhibit the latest lithium-ion 18V battery technology and we all know that lithium-ion batteries perform best when cold, but with temperatures as low as Baffin Island’s, this is truly the toughest endurance test known to man.

A large shipment of RAD’s B-RAD and DB-RAD tool is expected to arrive in August to begin the rail line construction. Then the mine crew will have to act fast, as they will only have 90 days to build the expansion before everything freezes up again in October.

So, if you’re wondering how our tools perform in the cold, we can confidently tell you that in one of the most inhospitable landscapes on earth, the only battery torque tool fit for the job is a RAD Torque tool.

With only eight inches of space in which to fit a torque wrench to tighten the traction motor bolts on their train cars, CN Rail was forced to use a variety of cumbersome tools to get the job done, including an offset gearbox and a hydraulic wrench to apply the torque. 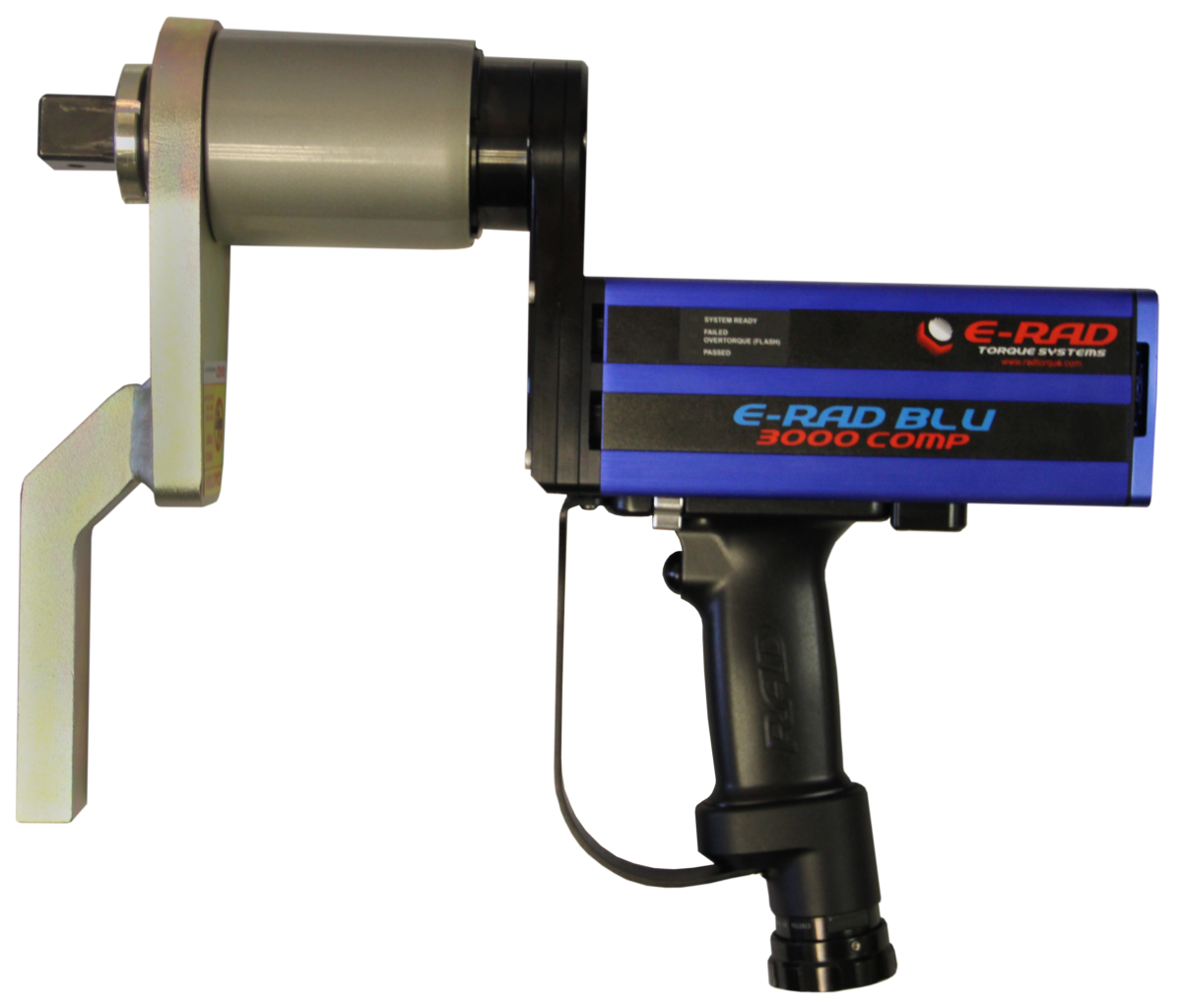 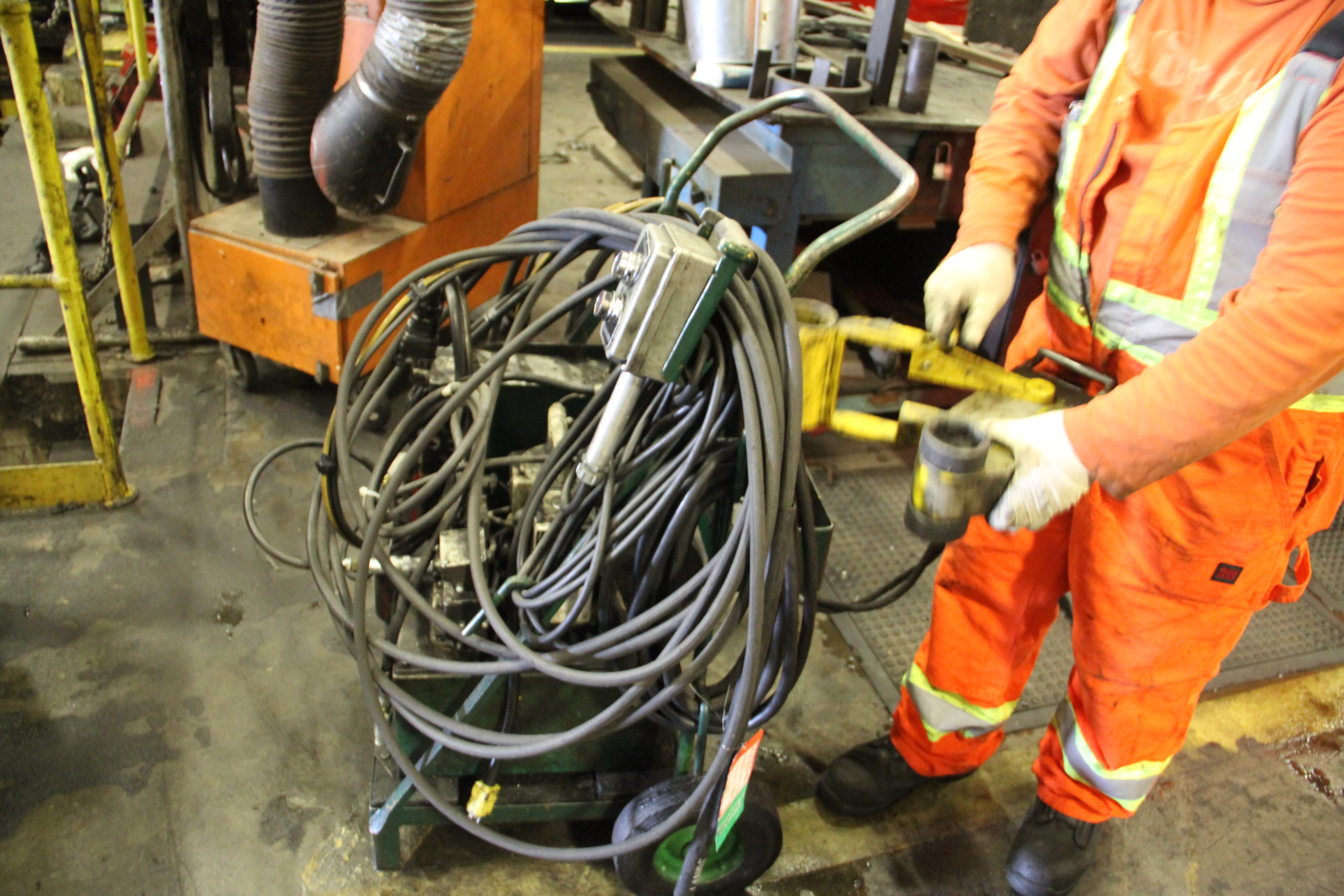 With only eight inches of space in which to fit a torque wrench to tighten the traction motor bolts on their train cars, CN Rail was forced to use a variety of cumbersome tools to get the job done, including an offset gearbox and a hydraulic wrench to apply the torque. These tools had no torque setting on them, so the team at CN Rail also needed to do a manual check to make sure it was torqued correctly.

After years of making this work, they knew it was time to find a better (and easier) solution.

CN Rail had been using the E-RAD BLU torque wrench on their locomotives and had grown to like the tool, so they wanted to find a way to use the E-RAD on their traction motors. They approached the RAD Torque Systems team to figure out if they could engineer a better solution to their problem.

The initial drawings were sent to CN team for approval and then a prototype of the new torque wrench was created. Then the RAD engineering team went to the CN site once again to test the prototype.

Three months after that initial visit, the CN Rail team had a new tool.

Today, CN Rail has a more efficient way of tightening the traction motor bolts, with a torque of 2250 ft. lbs. Plus, the E-RAD 3000 Offset is capable of data collection, which means every bolt that is torqued is recorded and can be downloaded to ensure it was done properly.

By working with RAD Torque to create a customized tool, they have now reduced the number of tools they need on the job. They’ve also reduced the number of employees needed to do the job, from two down to one. And, they are able to tighten traction motor bolts three times faster. More importantly, the company is very happy with the outcome.

If your bolts are in awkward spaces and your team is using old or multiple tools to get the job done, consider speaking to the RAD Torque team about how we can customize a solution to fix your challenge.

Planetary gear driven wrenches, as opposed to conventional torque tools, have the advantage of continuous rotation while applying controlled torque. This makes them much faster than conventional hydraulic wrenches and with their pistol grip they are safer and more ergonomic. Our motor is built right in the handle, so no longer the hassle of bringing a heavy and expensive hydraulic pump to the jobsite.